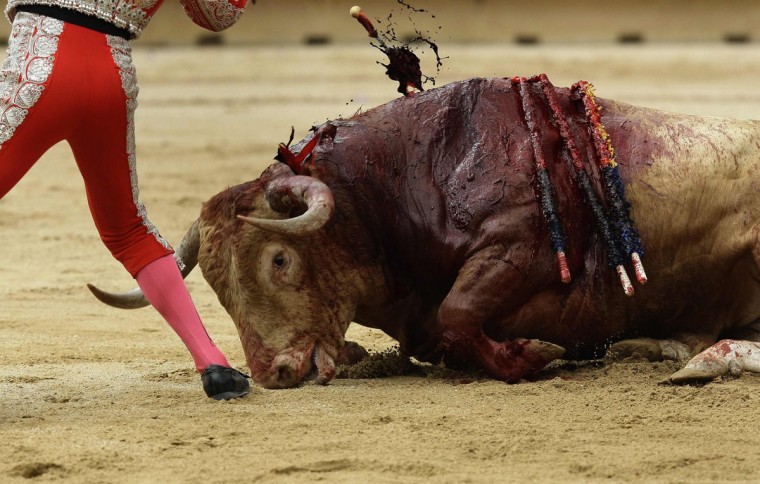 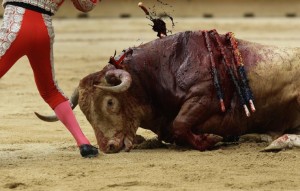 ‘There is no torture involved in bullfighting.’
The person who said this is Oscar Higares, bullfighter. He said it in an interview on national TV. He said it convinced of the truth he was speaking, outraged at the notion that anyone could contradict him. Who better than he, a matador (killer/slaughterer in Spanish) would know what the profession entails? A veterinarian? A farmer? A zoologist? A half decent human being?
It is hard to fathom how a person can lose contact with reality in such a way. Does he actually believe what he says or is it just a way of numbing his conscience?
There are many more examples of such a mindset, which borders on pathological delusion.
Slave traders and owners believed there was no torture involved in slavery, it was just a financial setup.
There was no torture in the Romans sending the Christians to fight against beasts in the Colliseum.
Female genital mutilation is not torture, it’s a religious precept, a form of social cohesion that upholds the decency of women. Ask many Muslim clerics in Yemen or in many African countries.
Domestic violence is not torture, just a private discussion. That’s what abusers think.
Dog fights and rooster fights aren’t torture. They’re a form of entertainment.
Nazi concentration camps weren’t places of torture, only of keeping certain people retained against their will for experiments, forced labour and deprivation. Adolf Hitler thought it was perfectly correct.
There is a difference with these situations, bar FGM and domestic abuse, which is that these things happened in other eras .Humanity has since then seen them in a different light. Also, FGM and domestic abuse are not condoned by a vast majority of people and steps are being taken to eliminate them.
The arguments given by bullfighters is that bullfights are an art and that the poor bulls would disappear if it was made illegal because it is a breed only apt for bullfighting. Therefore, it means that these animals have been created for the sole purpose of torturing them to death. Now, please, will someone explain how a 500+ kg bull cannot be reared for meat just like any other bovine? In any case, it would be more ethical to let the breed die out than to have animals raised to be slaughtered in such a painful way.
How to understand the so-called ‘national feast’? What is festive about harpooning an animal to death? Or like in the Toro de la Vega, setting it ‘loose’ and following it on horseback only to kill it in the woods? Or like the’ bous embolats’, or bulls on fire, where the bull’s horns are covered in lighter fluid-drenched rags, it’s head covered in mud (to protect it from the flames) and sent to run, blinded and enraged through the streets of the town with its horns on fire to the delight of the spectators?
Another of the horrors of bullfights is what they do to the horses that are used to carry the person that lances the bull. Their vocal cords are removed so that they cannot neigh in terror at the charge of the bull and cause it to back off from the impending stab.
The testimony of a sound technician who helped air bullfights for several years is hair raising.
‘In my case, I’ve done the sound mixing for some live TV airing of bullfights. I’ve always said that if instead of mixing the sound of the (music) band, applause, bravos, olés and all the rest, the sound was what is captured by the Sennheiser 816 microphone ( a microphone that captures sounds at a distance and very clearly) that is at ring level (where all the action is taking place), what people would hear would be the sound of the banderillas (skewers) piercing the bull’s skin, the bull’s bellows of pain at every stab. I’d accompany it with close up shots of the wounds, of blood clots like the palm of your hand, of the blood gushing anew at every heartbeat, or the look on the animal’s face just before the matador kills it with the final stockade. I think 90% (of people) would turn off their television at the sight of this slaughter, executed to the rhythm of a pasodoble.’

Most people in Spain do not support bullfighting. However, a small minority of rich and powerful, including the monarchy, keep it safe from being banned. It begs the question of why this is so. In a country that actively seeks to modernise itself and adopts humane laws to protect animals, how can a minuscule group keep a barbaric tradition going on the base of it being a tradition? If a tradition is cruel and does nothing to promote true cultural values, it should be abolished.
There remains the issue of people like Oscar Higares, bull killer, and others who will not see that their lifestyle is criminal and offensive and will do all they can to deceive people into accepting the survival of this ancestral rite.
We should beware of those who use tradition as an excuse for torture, force as an excuse for crime and art as a mask for death.
We should learn that all that tradition implies is not necessarily for the greater good.

One thought on “The Torture of Tradition”