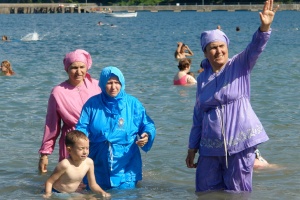 Nobody benefits from divisive and biased hype. Nobody benefits from denying cultural differences. Nobody benefits from discrediting entire nations or ethnicities.
Nobody? Actually, yes, someone does benefit.
The governing oligarchy, aided and abetted by world political leaders.
The 1% who wish to amass even greater fortunes at the expense of Humanity.
The ones who pull all the right strings attached to the right puppets.
The ones who seek to enslave the rest of us in one way or another, causing a wave of migration unknown since the Second World War, in their need to mix and blend ethnicities to the point of no return, in haste. They want more consumers. They need to create docile, debt enslaved citizens with no clue as to their past and little hope for their future. They are shaming the native European populations for the crimes of their own creation while luring desperate refugees and migrants into the rat trap of poverty in a foreign land. They promise riches and deliver next to nothing, not even dignity or respect. The elders will be shamed into silence and their traditions will disappear as the new generations grow, while these new generations will have no clue as to their origins, nor will they care.
If you want to subjugate a people, shame the elders and uproot the young, and you will effectively have left them at the mercy of whatever cultural wind blows hardest. A culture with dry roots and no new leaves will wither and die, as the living being that it is.*
Once stripped of its uniqueness and cheated of its diversity, the bleak howl of a human species that knows nothing of its greatness because it will have lost its essence and its purpose will be all that is left. Amid the turmoil and strife of the majority, the Masters will dictate everything from what we eat to the way we talk or, of course, the clothes we wear.

*(This is a quote from another of my posts, ‘In Praise of Identity, In Praise of Diversity’)
Cheat