The Camino de Santiago, or Way of Saint James, goes across the north of Spain, from the French border. There are other routes or Caminos but they all lead to Santiago. They have existed since the middle ages and they have been a source of cultural interchanges between Spaniards and pilgrims from all over the world. In recent years the number of people walking the Way has multiplied and towns and villages have adapted to this increase in population. Now there are people who are starting to question the utility and the existence of this rise in visitors.
It is known that when visitors begin to proliferate, neighborhoods lose their identity, everything is destined for the tourist and little or nothing for the neighbors. There are partial exceptions, such as O Cebreiro in Lugo, which is on the Camino Francés. It is a small, typical hamlet in the Galician mountains, but there are no houses other than shops, restaurants and guest houses. Obviously, there is a church, too. The entire village has been turned into a tourist centre and more specifically, a pilgrim centre, one of the most famous in Galicia due to the Camino Francés, or the French Way. It looks like the same village as a century ago, but the local economy has been reduced to providing services for pilgrims and tourists.
It could  cause astonishment that someone should protest against the Camino de Santiago, an age old tradition,  but that was the initiative STOP Gentrificación Logroño carried out last July 11. A group of young people marched through the streets of the capital of La Rioja and showed up at two pilgrims shelters waving banners that had messages like ‘Pilgrims go home’, ‘Less walking and more working’, or ‘Less pilgrims, cheaper wine’. It is the trite scenario of gentrification. As this type of reappropriation of urban space continues to grow, its dissidents grow, and not only in capitals such as London, Madrid or Barcelona, ​​but also in provincial cities on the way
They did not seek to end the ancestral pilgrimage route, but to denounce that the passage of the road through the center caused havoc, like massification in the urban center, which entails price rises in rentals, bars and restaurants. STOP Gentrificación Logroño proposes to divert the Way to the other side of the Ebro.

What is happening in Spain, and by extension to the south of Europe, is that we are being turned into the holiday resort of Europe. They’ve even invented an acronym for us: PIGS (Portugal, Italy, Greece and Spain). The name is revealing.

Sun and sea tourists don’t come here, to the north of Spain. We have beaches but they are not like their Mediterranean  counterparts. They’re rugged and cold, breathtakingly beautiful and unique. The tourists that come here expect, and get good food, a cool summer and less tourists. However, there are parts of our geography that are starting to become overcrowded and not everyone is thrilled about it. The offer of quaint villages and lots of cultural and historical sites, together with many attractive options  to enjoy with family and friends is finally starting to draw the attention of our northern neighbours. A careful assessment of the positive and negative aspects that an increase in tourists brings should be made if we are to maximise the opportunity and minimise the risks.

What we should strive for is to show tourists our treasures, the living, breathing society we are, and not just erase parts of our culture and past, turning our villages into museums of the way things were and not real live examples of our unique ways and mores. 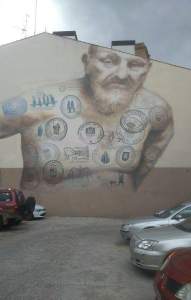